Photos of John Gaydos' garden from 2009.

Photos of John Gaydos' garden from 2009.

John Gaydos is the original Proven Winners® employee, he has worked for Proven Winners since 1997.  John got hooked on gardening as a child working on his grandfather's truck farm and playing in his grandmother's orange groves.  He has a bachelors degree from Ohio State University and has worked in horticulture in many capacities.  He and his wife, Beckie, live and garden in Rochester, Michigan.  They have lived in their current house since 1977.  He is blessed with two huge American Elms, which provide dappled shade to most of his garden.  He will be posting photos of his garden periodically throughout the summer.  To see photos of Kerry's garden click here.  To see photos of Dave's garden click here.

Similar to most gardeners, I find the real joy comes in planting and is re-enforced when you first enjoy the fruits of your labor. In June and July the garden give you constant enjoyment as you maintain the plants, harvesting flowers or fruit from your vegetable garden, but by August the thrill is gone and the evidence is all around you. Anything that you could put up with earlier in the summer now seems blatant and screams that something must be done: slug eaten hosta leaves, flea beetle damage on Tuscan Sun Heliopsis, plants that are out of control and should have been pinch or pruned or hacked back weeks ago now threaten to destroy any aspect of form or function.

Shortly after I took these pictures, I brought the wheel barrow and the pruners and a sharpened knife to the garden. I had watered and fertilized everything the day before, so nothing was wilted and the plants were standing tall. The knife was used on the hostas around the pool, and under the beech, damaged leaves gone in an instant. The Oso Easy Roses that have created a such a dense ground cover were brought back into line, (though they gave a great fight they did yield) and the garden space that was found beneath the roses were quickly filled with a pot of Snow Princess Lobularia that had overgrow the capacity to maintain water and a few Superbena Coral Red pots that had again out grown their containers. Baskets that had grown one sides, were trimmed and the perennials that had kept up with the spring flowering material were cut back for one last flush before fall. Many of the grasses were straightened up and the edges trimmed back for a more defined look. Working from one end of the garden to the other forced me to look evaluate and treat each plant as part of the overall landscape.

Pruning, fertilizing, and pulling a few weeds, along with moving and mixing the various patio pots around really brought a new look to the house. If fact, sometimes I wonder why I didn't start out with some these plants being companions. I also was forced to look at what worked and what didn't. How can I improve the garden so that next year, we have more cut flowers for the house, or avoid the slug implications on the hostas caused by having splashing water in the garden. Most important, I was re-acquainted with the plants, I look forward once again to see the results of my Sunday in the garden, and naturally to hear what others will see and enjoy. Granted most visitors never see the flaws in design, the insect damage, even the weeds, hopefully what they see and what I work for, is the environment that a garden brings to the home. 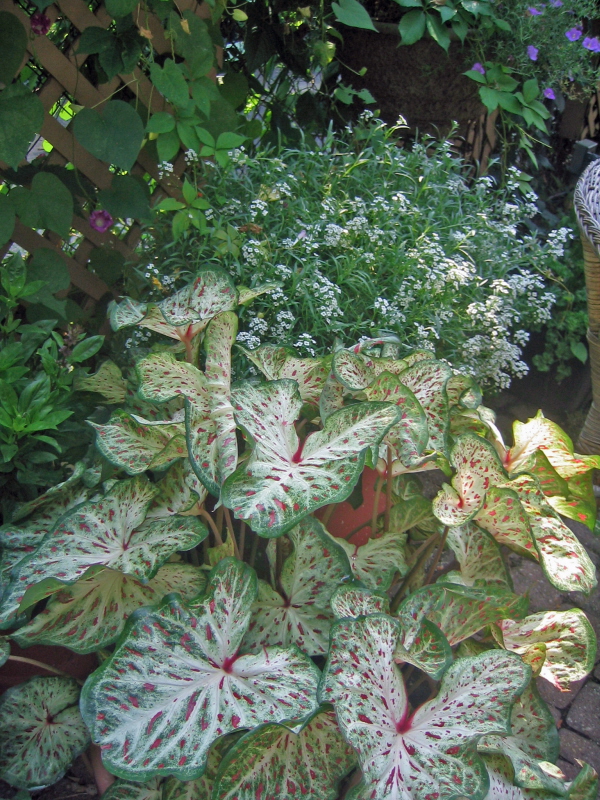 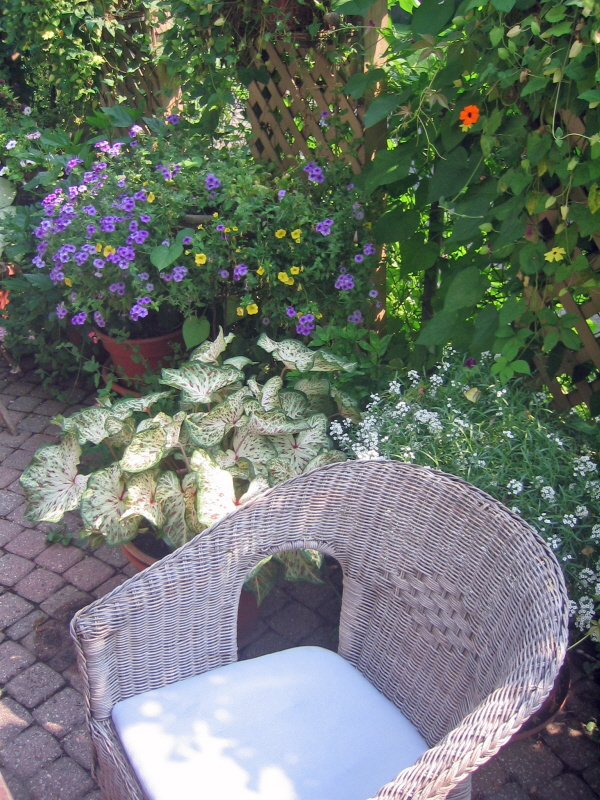 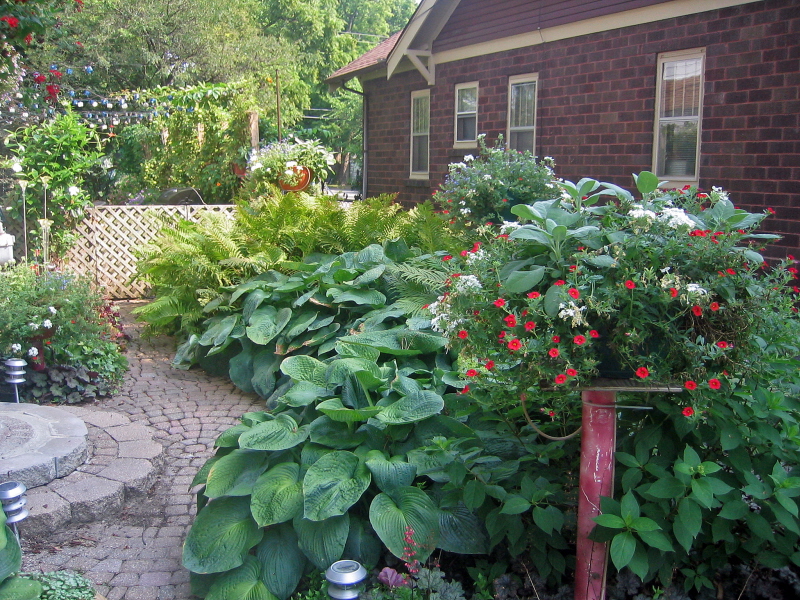 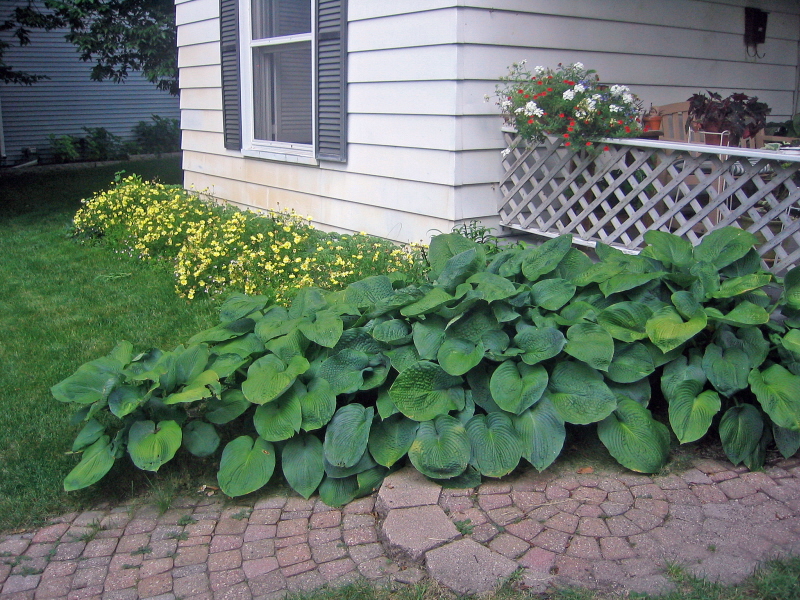 By this time of smmer, despite a few slug problems the hostas look great.  They've grown huge and are looking lush and full. 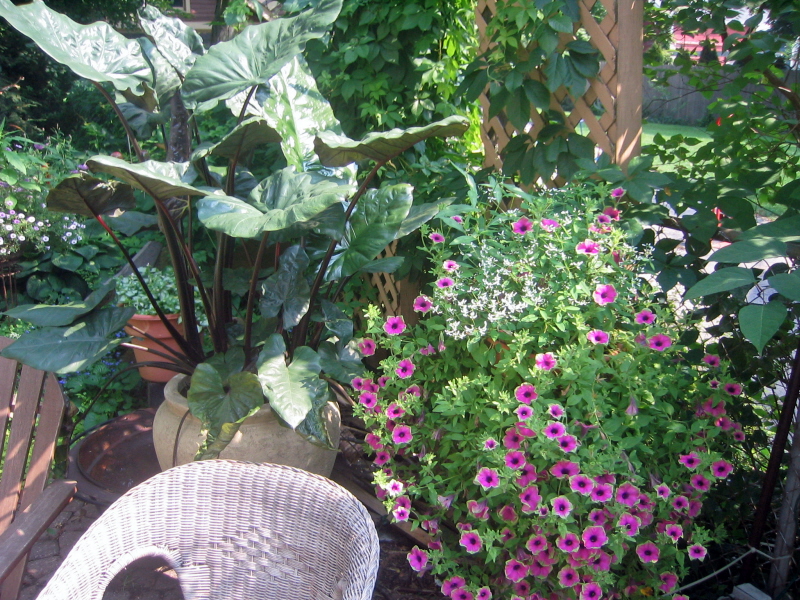 Pretty Much Picasso (lower right corner of the photo on the right, ad at the back in the photo on the left) petunia is a truly unique plant that won't be available until spring 2010.  The purple center is edged in lime green.  Very cool! 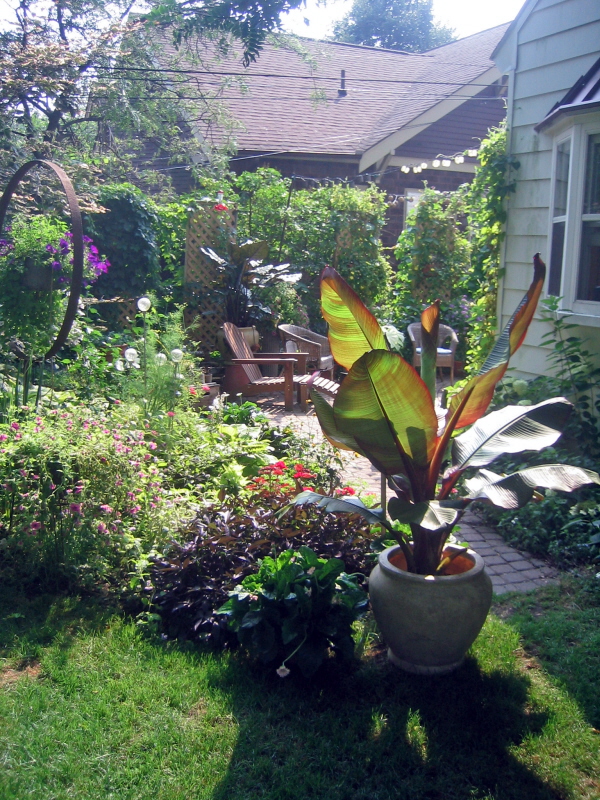 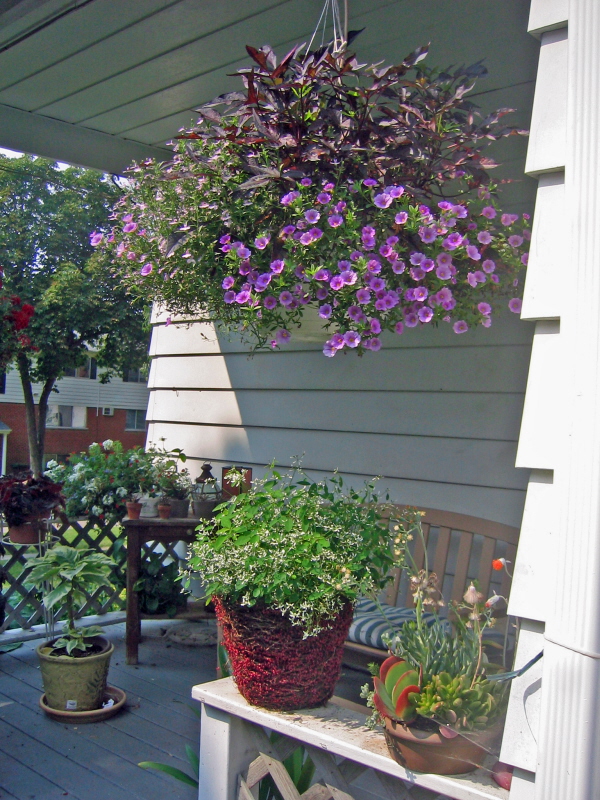 The potted Red Banana in the photo on the left adds a tropical feel to my Michigan garden. It makes a dramatic statement adding both height and texture to the garden.  The contrast of the large foliage against the smaller flowers and foliage of the other plants helps make all of the plants shine. 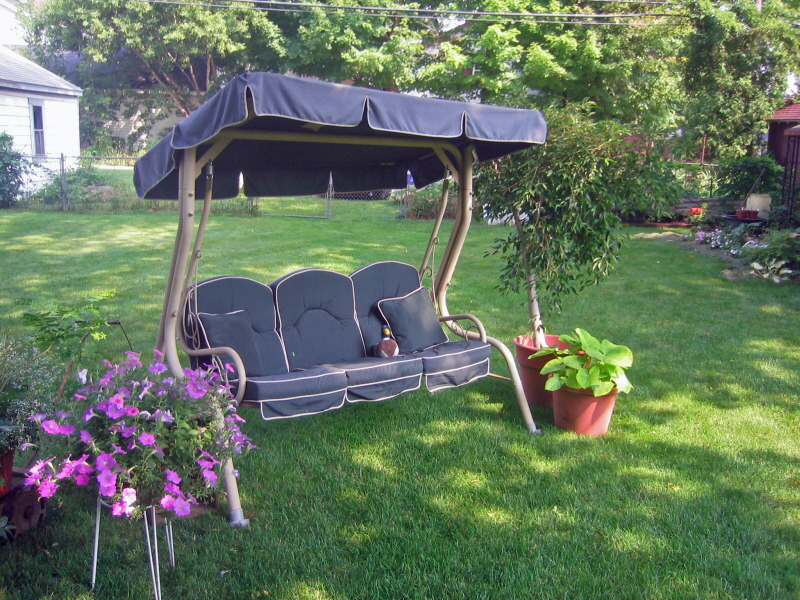 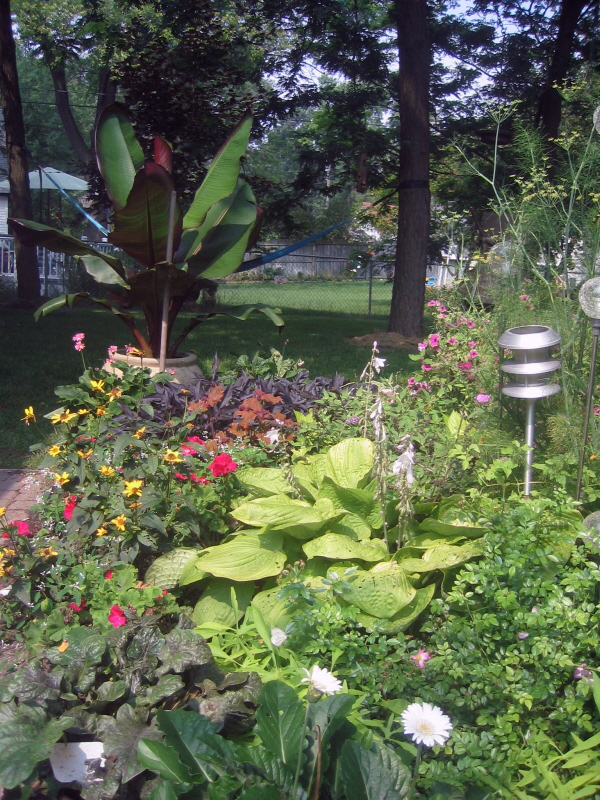 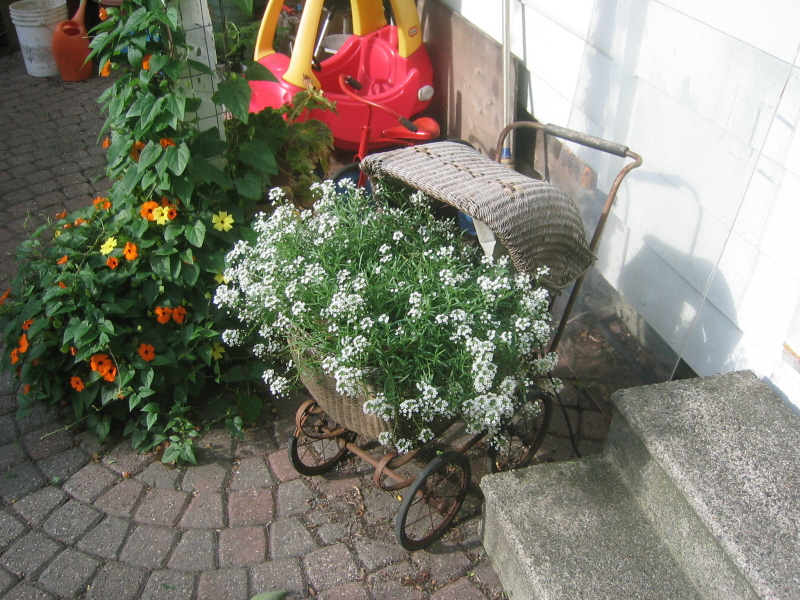 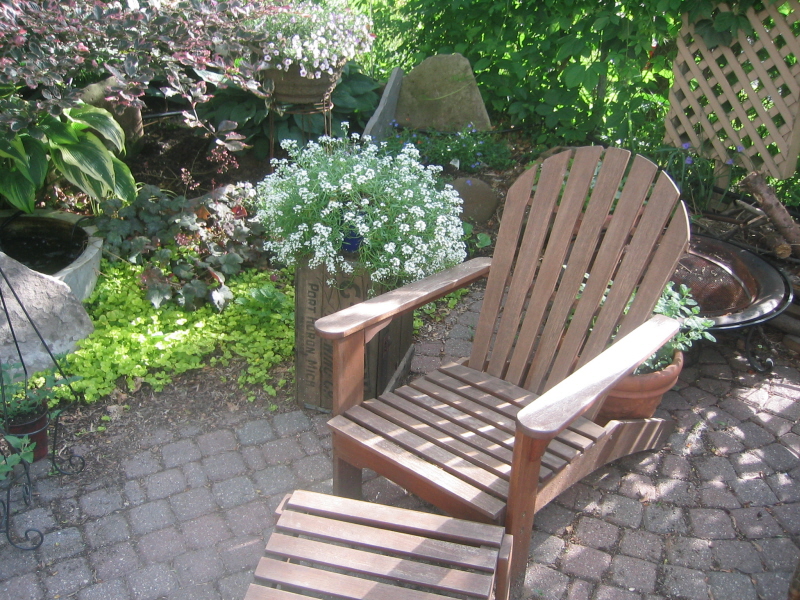 Finally, here in Michigan we are starting to get some warmer evenings.  This has really helped move the garden forward.  Snow Princess™ Lobularia is the star of my patio and you will find it in multiple locations - planted by itself and with other Proven Winners®.  On the left, Snow Princess™ flows out of an antique child's baby buggy.  Snow Princess™ is growing in a 12-inch pot and already tumbles down a good 10-inches.  On the right, is a smaller container of Snow Princess™ planted with Laguna™ Sky Blue Lobelia.  The Laguna™ Sky Blue is still growing and flowering.  From a distance the only thing you see is the white clouds of the Snow Princess™. 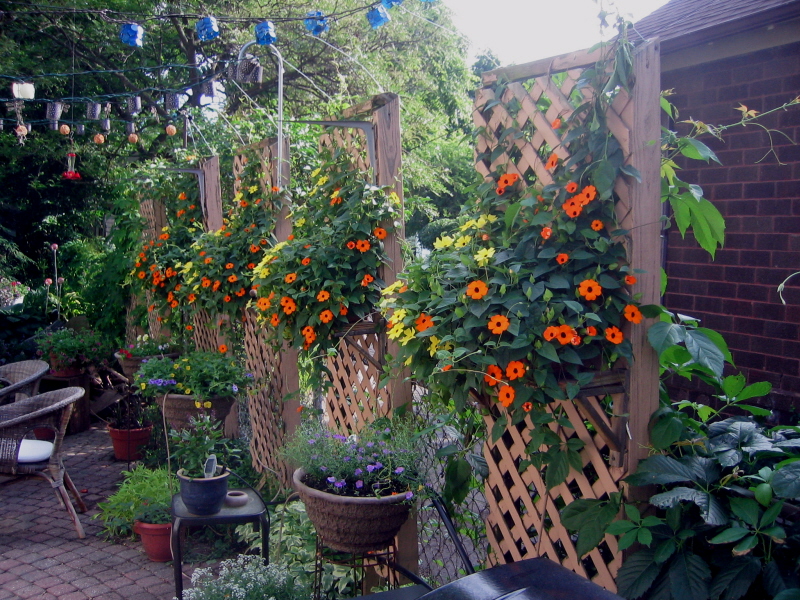 My window boxes are finally starting to grow, Lemon and Orange A-Peel™ Thunbergia are both agressive growers and these plants should soon reach the lines supporting the patio lights.  The plan is by the end of the summer the A-Peel™ Black-eyed Susan Vines will have spanned the 15 foot patio and will not only provide a dappled shade, but also a brilliant colored tapestry of yellow and orange flowers. 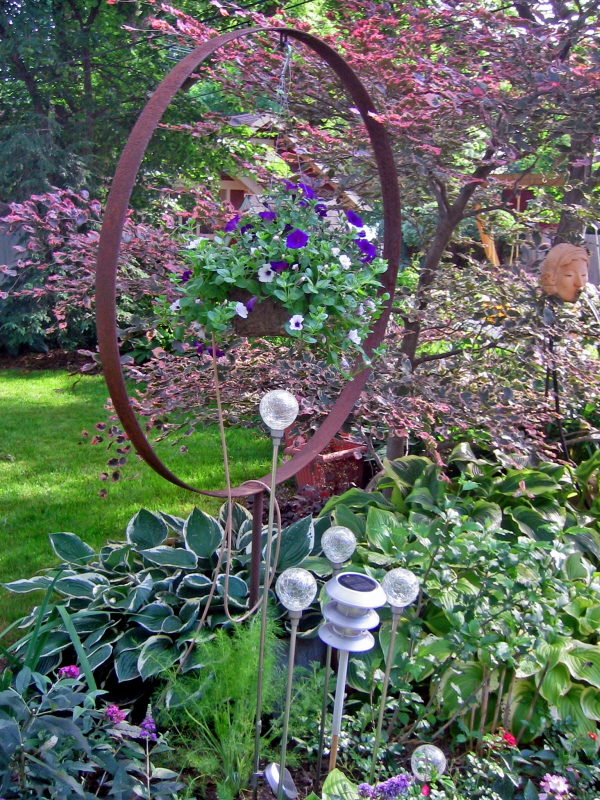 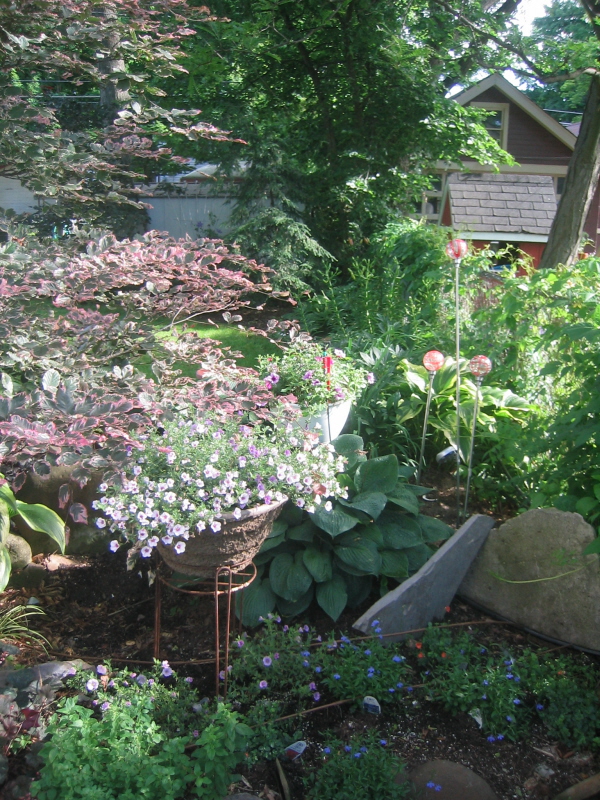 The Tricolor Beech continues to dominate the backyard with it's beautiful display of rose, green & white leaves.  As the summer progresses, the rose color will lessen and the leaves will be primarily green and white.  The hostas are just beginning to throw their flower spikes, which will keep me busy as I trim them out and remove any spent foliage.  The Let's Dance® Starlight Hydrangeas have all bloomed their first flowers.  Those flower heads have been removed to force new growth and the next set of flowers.  The flowers will be missed in the short term, but their neighbor in the garden Lo and Behold™ 'Blue Chip' Buddleia is already filling the void.  As you can see in the photo on the right, not only do I use drip irrigation on the baskets and containers on the patio and porch, but I also have it running through most of my flower beds.  I run the drip zones for 20 minutes every other day and there is a dripper every 12 inches along the lines.  The emitters are 1/4 gallon per hour and currently the 20 minutes is enough to keep the soil moist and the plants happy. 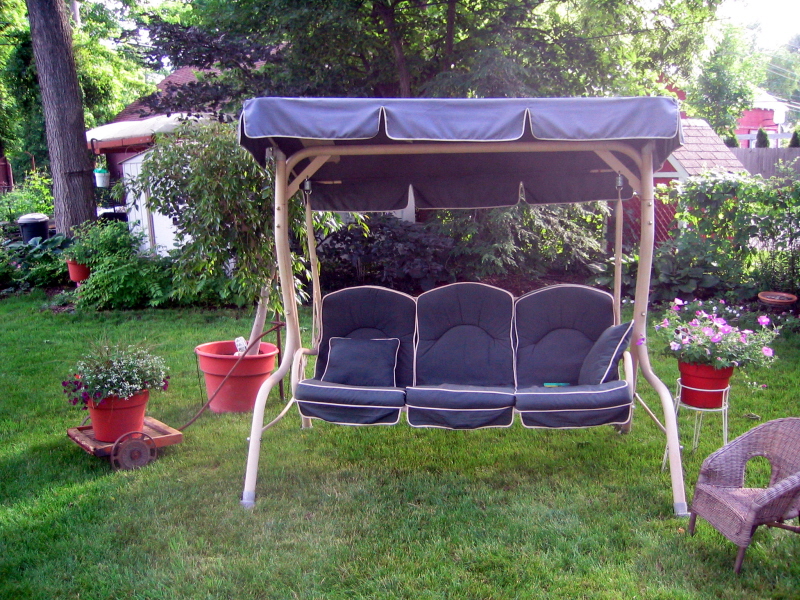 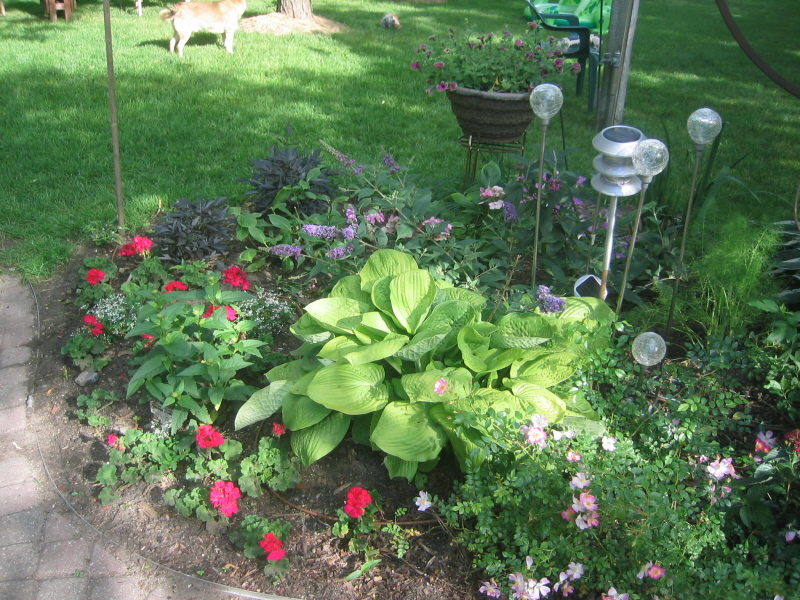 New since the 25th of May is the lawn swing, a favorite spot to sit and read.  However, nice as the swing is, it seems to need flowers around it in order to fit into the garden decor.  I try to keep all the plants & containers portable so that mowing is easy.  This means the 38 year old Ficus, the Diamond Frost® Euphorbia, Superbells® Calibrachoa, and Graceful Grasses™ Toffee Twist Carex combination and the pot of Supertunia® Petunias are all mobile.  Even the old garden dollie is incorporated into the decor, so that moving is very easy.  The picture on the right, really shows the effect of trimming the spent flowers off of the Let's Dance® Starlight, but soon the Daredevil® Mulberry Geraniums and the 'Tuscan Sun' Heliopsis will fill in and bring new color to the garden.

One of my favorite corners in the garden incorporates a Tricolor Weeping Beech tree and then picks up those colors with a planting of Supertunia® Vista Bubblegum mixed with Supertunia® Vista Silverberry Petunia.  By the end of summer, this bed will be a mound of color. 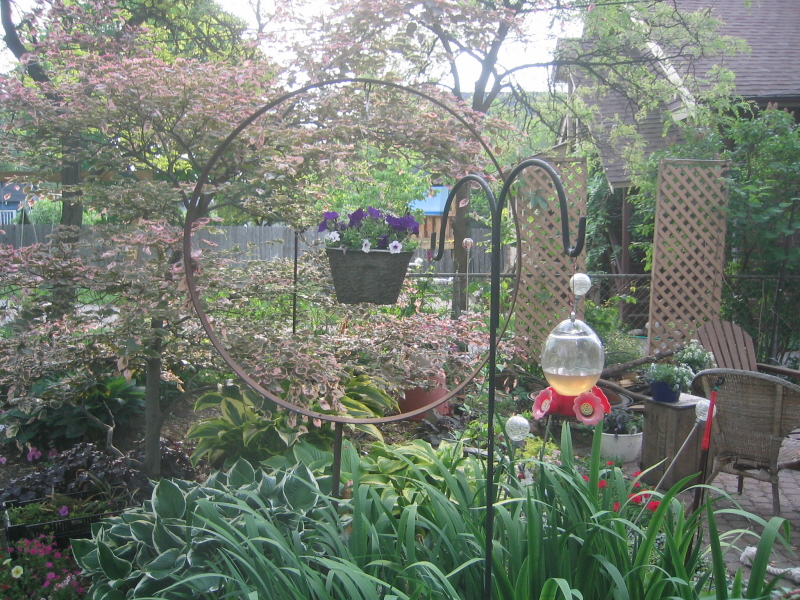 On the other side of the beech tree is a piece of garden art, a metal hoop that I use to showcase a hanging basket.  The basket showcases Supertunia® Royal Velvet and Supertunia® Mini Blue Vein.  By the end of the summer the hoop will practically be full of blooming petunias! 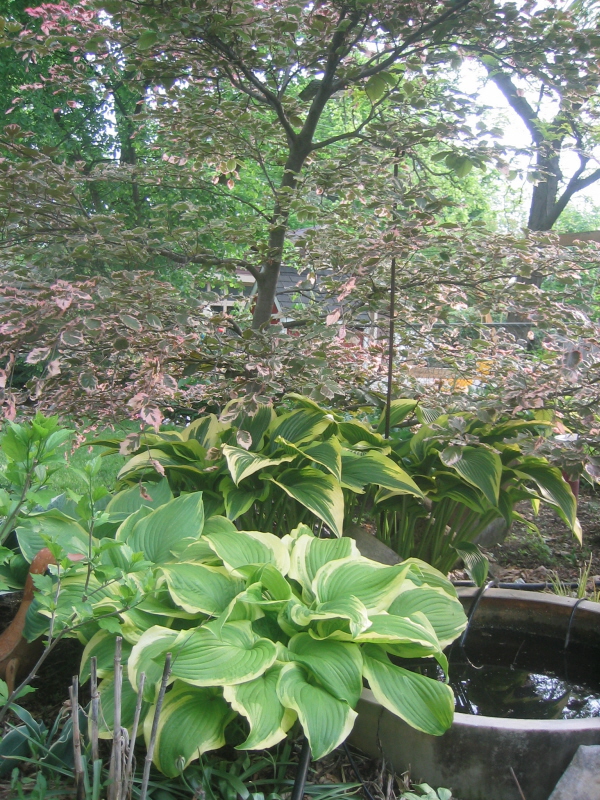 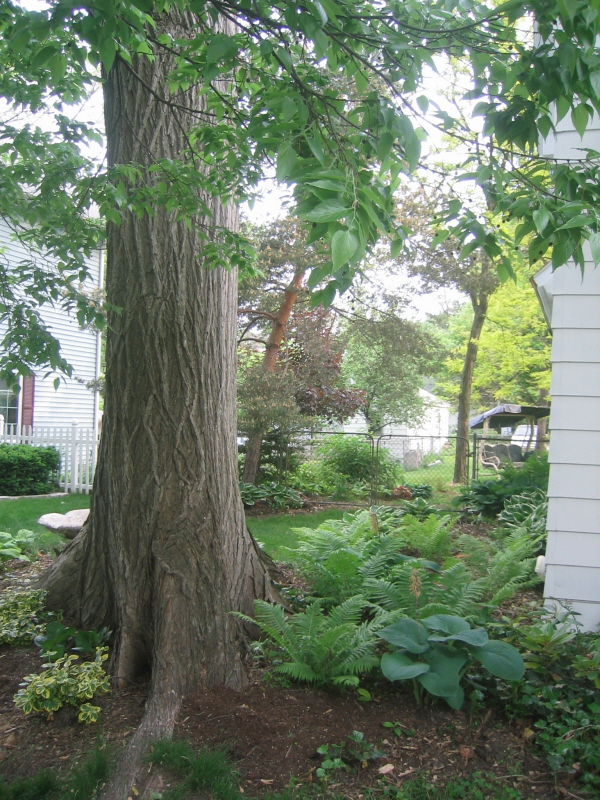 Hosta are featured in many areas of my garden which has a lot of shade.  They fill many a corner of the garden and gracefully combine with ferns for a great shade bed. 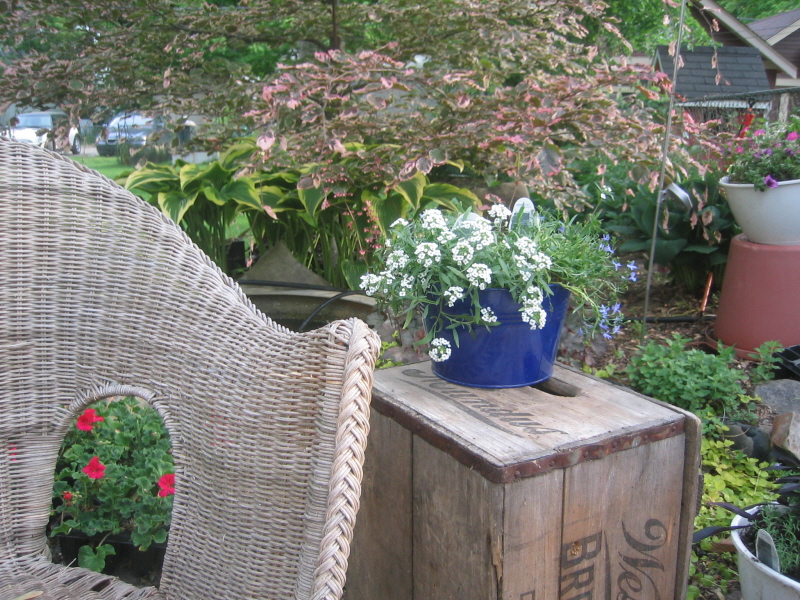 Here Snow Princess™ is shown off in a cobalt blue pot sitting on a wooden crate I repurposed as a garden table.  Snow Princess is an alyssum but unlike other alyssum it is heat tolerant.  Snow Princess isn't going to be available until Spring 2010 at retail, I'm lucky to get to have it a year early. 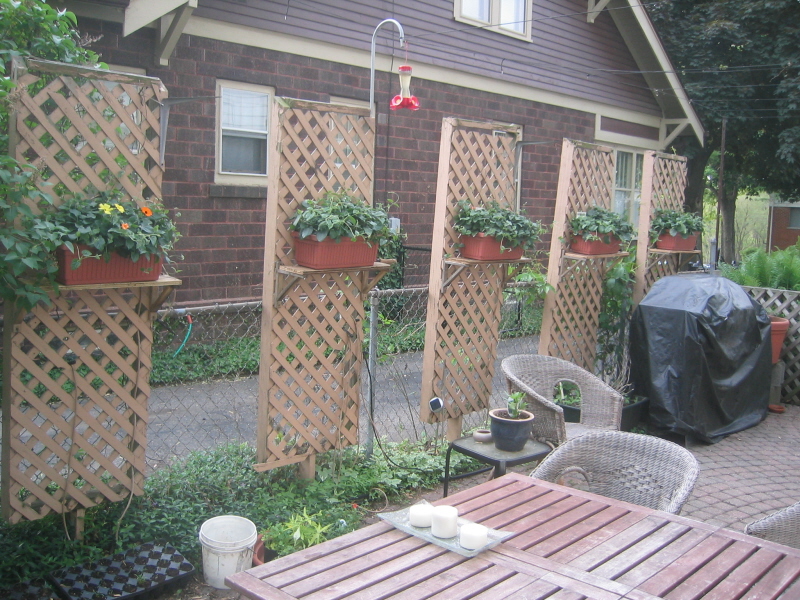 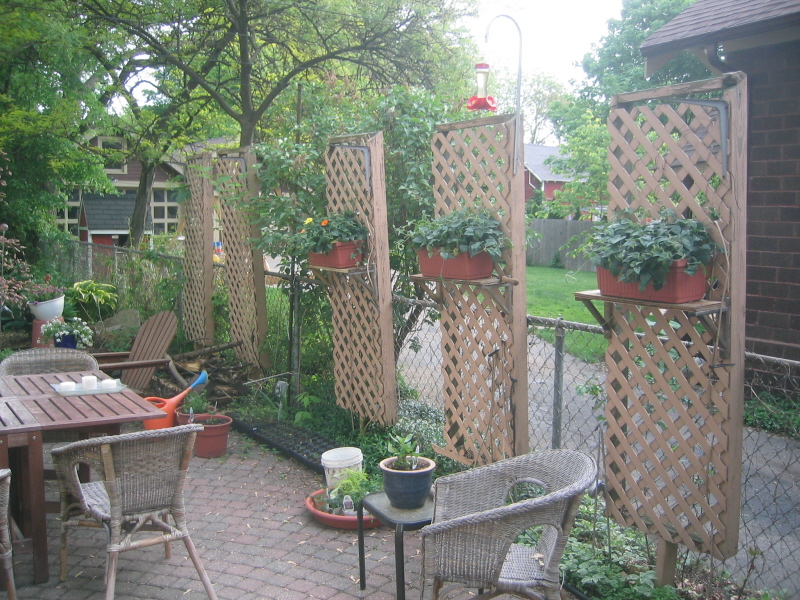 These lattice pieces work as a screen to add a bit of privacy from the home next door but are open enough that we aren't shutting out our friends.  They also function as a trellis for the vines planted in the window boxes.  This year I am growing black-eyed susan vine, Thunbergia.  The planting area  mix of yellow and orange black-eyed susan vines.  The lattice pieces are treated with a  natural wood stain but to add even more color I could paint the lattice in a coordinating or contrasting color.

Several years ago I built these raied beds for my wife, Beckie, to use as a teachign tool with her ESL (english as a second language) students.  Over the past two years I have reclaimed them for myself and have raised a bumper crop of the vegetables I enjoy growing.  This year I have planted leeks, onions, snow peas, carmen red peppers, cluster tomatoes, a garden peach tomato and the typical red sanwhich slicing tomatoes.  I have also planted lettuce, carrots, basil, fennel, and parsley.  Cucumbers, squash and pumpkins are still to come - as soon as we stop getting night temperatures in the low 40's.  To read more about raised beds click here.