Hydrangeas. Lilacs. Buddleia. These are classic shrubs, and for good reason.

Hydrangeas.  Lilacs.  Buddleia.  These are classic shrubs, and for good reason.  And if you’ve ever grown and enjoyed these garden classics, you’ll love what’s coming this spring from Proven Winners® ColorChoice®.

Take hydrangeas.  You might be familiar with ‘Annabelle’, a native, smoothleaf hydrangea known for its white mop-head flowers resembling large, fluffy white snowballs.  Smoothleaf hydrangeas such as ‘Annabelle’ are North America’s native hydrangeas.  You can find them thriving in gardens from the Deep South to the Far North, blooming reliably year after year.  Best of all, these plants produce flower buds on new wood, which means it will still produce flowers even if the stems dieback to the ground from extreme weather or cold.

Though wildly popular for these reasons, ‘Annabelle’ has two drawbacks.  First, its large flower heads are known to flop to the ground during a heavy rain, tipping over after its flowers become weighted with water.  Second, ‘Annabelle’ is limited to a single color – white. 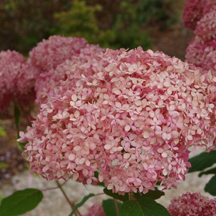 Invincibelle® is the very first pink-flowered form of ‘Annabelle’.  This also makes it the only ‘Annabelle’-type hydrangea on the market today with a natural color beyond white.

You can see more than 100 blooms on single plant. Its dark pink buds open to hot pink flowers, which mature to a soft pink. And unlike other hydrangeas, its flowers are always pink, regardless of the soil.

In addition, for every Invincibelle® Spirit II sold, Proven Winners ColorChoice will donate $1 to the Breast Cancer Research Foundation in support of finding a cure for breast cancer.  So you not only get pink beauty in your garden all season, but you will also be contributing to a great cause.

Darrel Apps, a retired nurseryman from Wild Rose, WI (zone 4) has tried to grow reblooming hydrangea macrophylla with rather poor results. This isn’t surprising, given he can wake up to -4 temperatures and a 35-mile an hour winds in the fall months. But despite these harsh, northern conditions, Darrel reports success in growing Invincibelle Spirit. 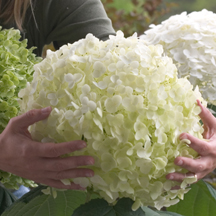 Another new smoothleaf hydrangea is Incrediball® Hydrangea – described by some as an “Annabelle on steroids.” Its huge flowers are the biggest ever seen on a hydrangea. Even with the basketball-sized blooms, the mature hydrangea will not tip over like the original ‘Annabelle’, even after a strong summer thunderstorm.

Like Invincibelle® Spirit Hydrangea, Incrediball® is as easy-to-grow as ‘Annabelle’.  Incrediball® Hydrangeais a natural choice for anyone who wants everything they love about the ‘Annabelle’, but with huge flower heads and improved “flop-proof” stems.

A quick note about pruning your smooth-leaf hydrangeas, such as ‘Annabelle’, Invincibelle® Spirit Hydrangea or Incrediball® Hydrangea:  remember these hydrangeas bloom on the current season’s growth. So cutting them back in late winter or early spring will actually encourage the new growth and produce flowers. So don’t worry about taking the pruners to these new amazing hydrangeas.

A New, Better Butterfly Bush
Another classic is the buddleia, or butterfly bush, a mainstay of gardens for generations. True to its name, butterfly bush attracts flocks of butterflies, as well as hummingbirds, adding extra enjoyment to your garden.  Buddleias are also drought tolerant once established, making them an excellent choice for areas with water usage restrictions.

Unfortunately, run-of-the-mill buddleia also grows about 6 foot tall by mid-summer, a problem for smaller gardens.  The traditional varieties of buddleia are also proving to be aggressive and even invasive in some areas, to the point of facing outright bans through legislation in some states, such as Oregon. 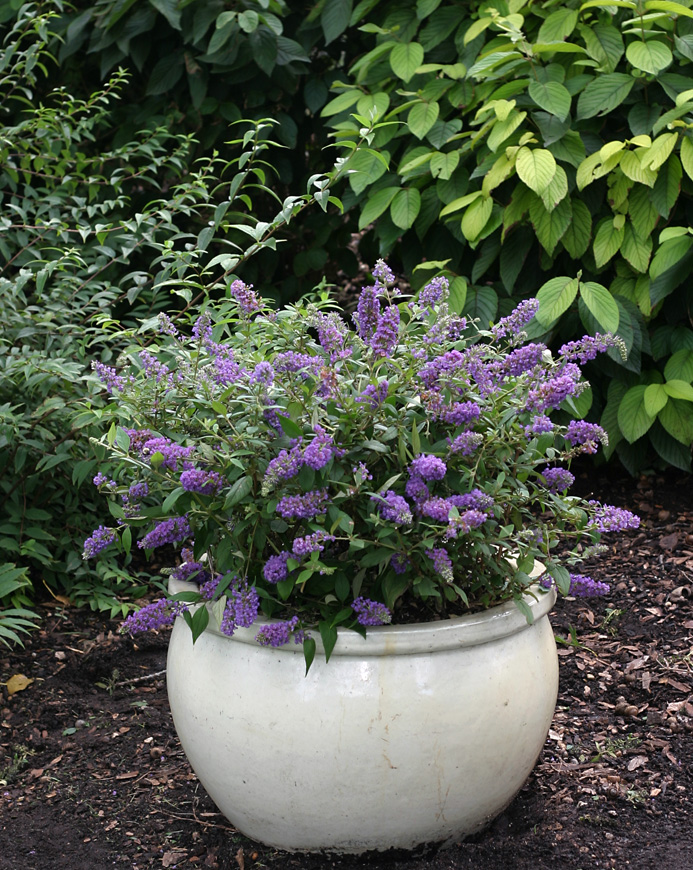 Once again, Proven Winners ColorChoice has taken a classic and improved it with Lo & Behold® 'Blue Chip' Buddleia.

Lo & Behold® 'Blue Chip' Buddleia is a miniaturized butterfly bush, so it’s compact enough to plant in a pot on your patio while keeping its appeal to butterflies.  Lo & Behold® ‘Blue Chip’ is also non-invasive.  This cultivar will not overwhelm the landscape, and never develops the weedy, unkempt habit so typical of butterfly bush.  Now even gardeners with limited space can attract butterflies and hummingbirds to their garden with colorful buddleia.

‘Blue Chip’ is also one of the few buddleia permitted for sale in the state of Oregon, where it is sold as a Summer Lilac rather than a Butterfly Bush to comply with state regulations.

Best of all, Lo & Behold® 'Blue Chip' Buddleia is the only miniature butterfly bush with loads of fragrant blue flowers that bloom continuously. You won’t need to prune this plant as you do older varieties of buddleia.  A true survivor, Lo & Behold® ‘Blue Chip’ is deer resistant and both drought and frost tolerant.   In addition, it will bloom from mid-summer to frost without deadheading.

Ann from Oklahoma wrote us to say, “Every claim made for Lo & Behold® 'Blue Chip' Buddleia is absolutely true. Lovely foliage, beautiful continuous blooms, and it thrives in the heat and humidity of an Oklahoma summer. Amazingly, ‘Blue Chip’ is still covered with blooms at the end of October!”

And it’s not just people like Ann who are impressed, but also industry professionals.  Lo & Behold® 'Blue Chip' Buddleiawas chosen as a top two favorite by the Royal Horticulture Society Buddleia Trials and was awarded the Blue Ribbon at the Mid-Am Nursery show as “The Best New Plant” of 2009.  And most recently, it was awarded the Gold Medal for “Best New Plant” at the Salon de Végétal in France in February 2010.

Lilacs are another longtime garden favorite. Their sweet fragrance and beautiful flowers have marked the arrival of spring for generations of gardeners.  But after just a week or two, the blooms of traditional lilacs die away and are gone for the rest of the year.  Until now, anyway. 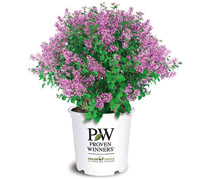 Meet Bloomerang® Purple, a new lilac variety that indulges gardeners with not a weeks worth, but months of beautiful, fragrant flowers.  Bloomerang is the most compact, heaviest-blooming dwarf lilac ever grown.

It produces a bumper crop of fragrant lavender flowers in spring, and then continues to bloom again from mid-summer until frost. Many gardeners have reported seeing flowers as late as Halloween.  Every stem can produce flowers in summer, creating a burst of purple in your garden.

Bloomerang® Purple is deer resistant as well as mildew resistant. Bloomerang®  is also a compact plant that fits easily into any sized garden or landscape, large or small. If you have been reluctant to allocate space to a plant that is interesting for only a few weeks at a time, you can now enjoy lilac flowers spring, summer and fall.

Bloomerang® Purple is best pruned right after the spring bloom, as this creates a fuller shrub with more branches, which means more flowers. Remove spent blooms promptly to encourage reblooming.

Fill Your Garden with Proven Winners

All four of these new plants, Invincibelle® Spirit II Hydrangea, Incrediball® Hydrangea, Lo & Behold® ‘Blue Chip’ Buddleia, and Bloomerang® Purple Lilac, are available at retailers in spring 2010. And don’t forget that Proven Winners ColorChoice flowering shrubs are the easy way to get lots of color in your garden with very little effort. That’s because every ColorChoice shrub is a Proven Winner, carefully bred, evaluated, and selected to deliver superior performance and satisfaction.

So look for the white Proven Winners® container at better garden centers, or find a retailer in your area, and enjoy these updated garden classics from spring to fall!